While living in Prague for the winter, I was drawn to the Communist flats (Panalaks) on the edge of the city. This was partly because of there austere minimalist grandeur, but more because they reminded me of the Cold War – stories of spies and espionage – which I grew up with. 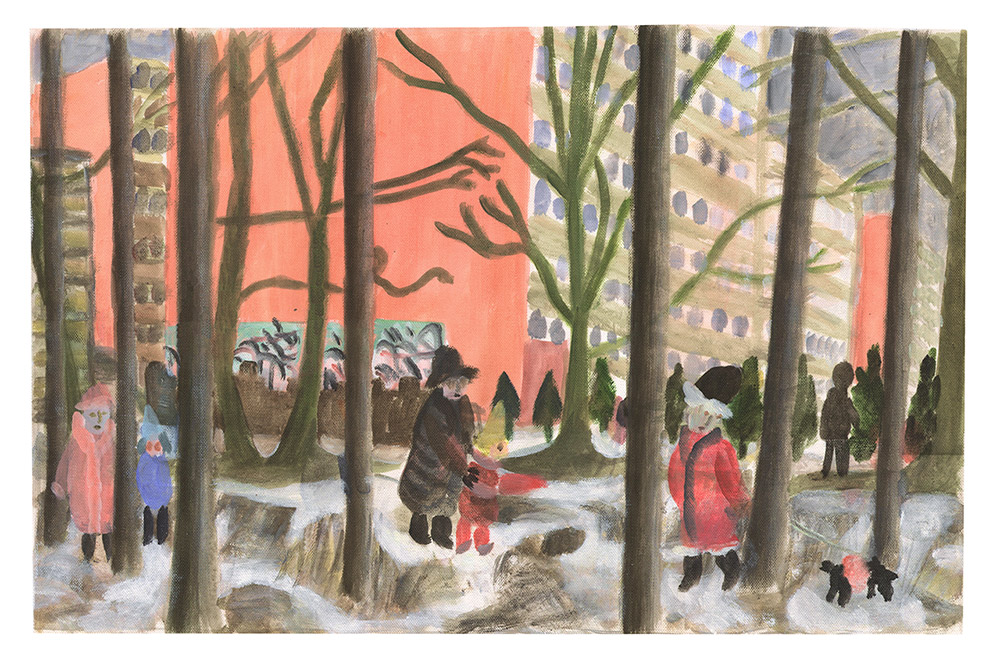 I sat on a frozen tree stump, which I’d covered with a plastic bag. It took three sessions to complete this picture, because of freezing conditions. Women walking their dogs looked at me as if I was some kind of wild animal. No-one came close enough to see what I was up to, until I’d nearly finished, when a jogger ran over my picture!

I told him he is the first person to speak to me.

“People are careful of strangers around here” he said. “Lots of people live here, they say we live like rabbits in these Paneláks.”

He then adds: “Rabbits that don’t like to socialise.”

Panelák flats can be found on the outskirts of nearly all towns and cities in the former Eastern Block. The name stems from the simple construction method of using panels. 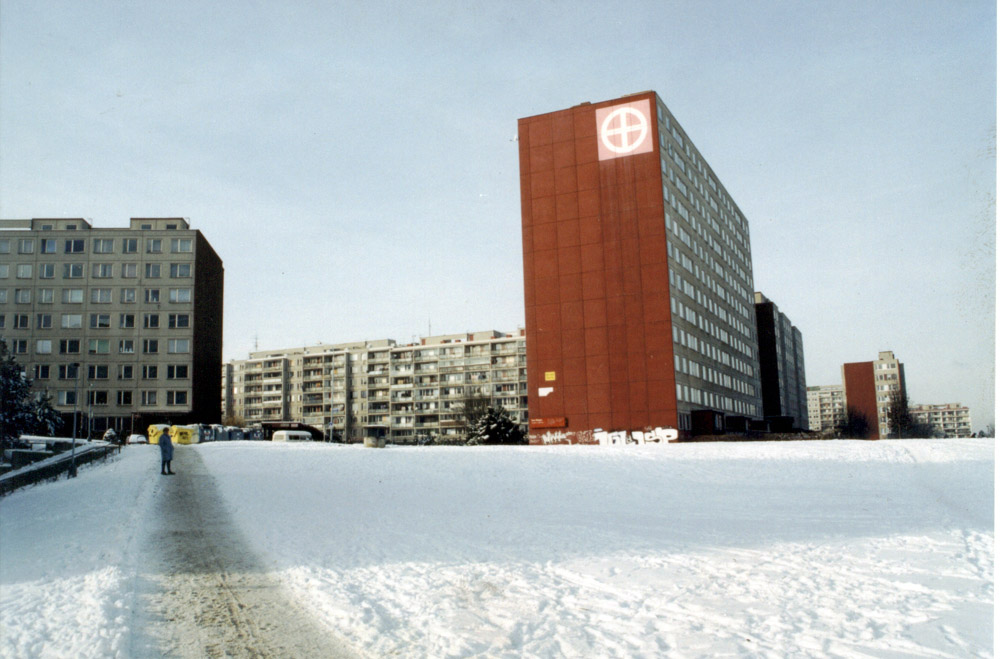 It was during the Communist era that the term ‘Panelák’ first came to light. Most were built from the 1960’s to the 1990’s. These blocks of flats were designed to supply the increasing need of affordable housing, and to create a collectivist society within the people.

This is how the Panelák became an integral part of the Communists grand plan to achieve maximum efficiency for the least cost, hence their uniform block shape and layout.

After the fall of Communism the Czech Government has been encouraging schemes to modernise these flats rather than knock them down. So, what has become the most visible part of their Communist heritage, will be with us for a long time to come.

Many people, however, and especially those who live within the flats, detest their appearance and all they represent.

But for an outsider like me from Western Europe, these flats possess a certain austere charm and a minimalist grandeur that cannot be ignored when you look upon them.

The winter pictures were more difficult to complete due to the cold weather, which sometimes dipped below -10 degrees Celsius. I used acrylics because of their short drying time, but even then the water would sometimes freeze on the canvas. I also drew with pastels, because they enabled me to work with gloves on.

I found the local people mostly friendly, although not so many stopped for a proper chat. But when they did, I made sure to ask them what they thought of the Paneláks… 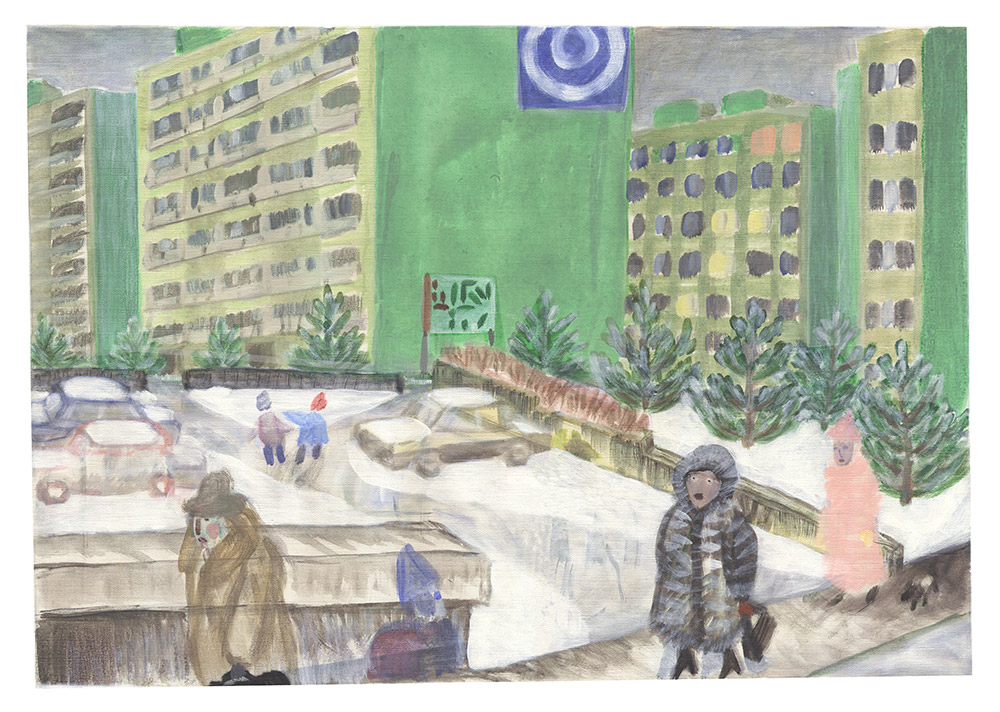 A business man asked me curiously: “Why are you painting these flats?”

“Because I like their colour and their powerful design,” I said.

“You know we hate them, don’t you,” he whispered to me.

With that he walked away. 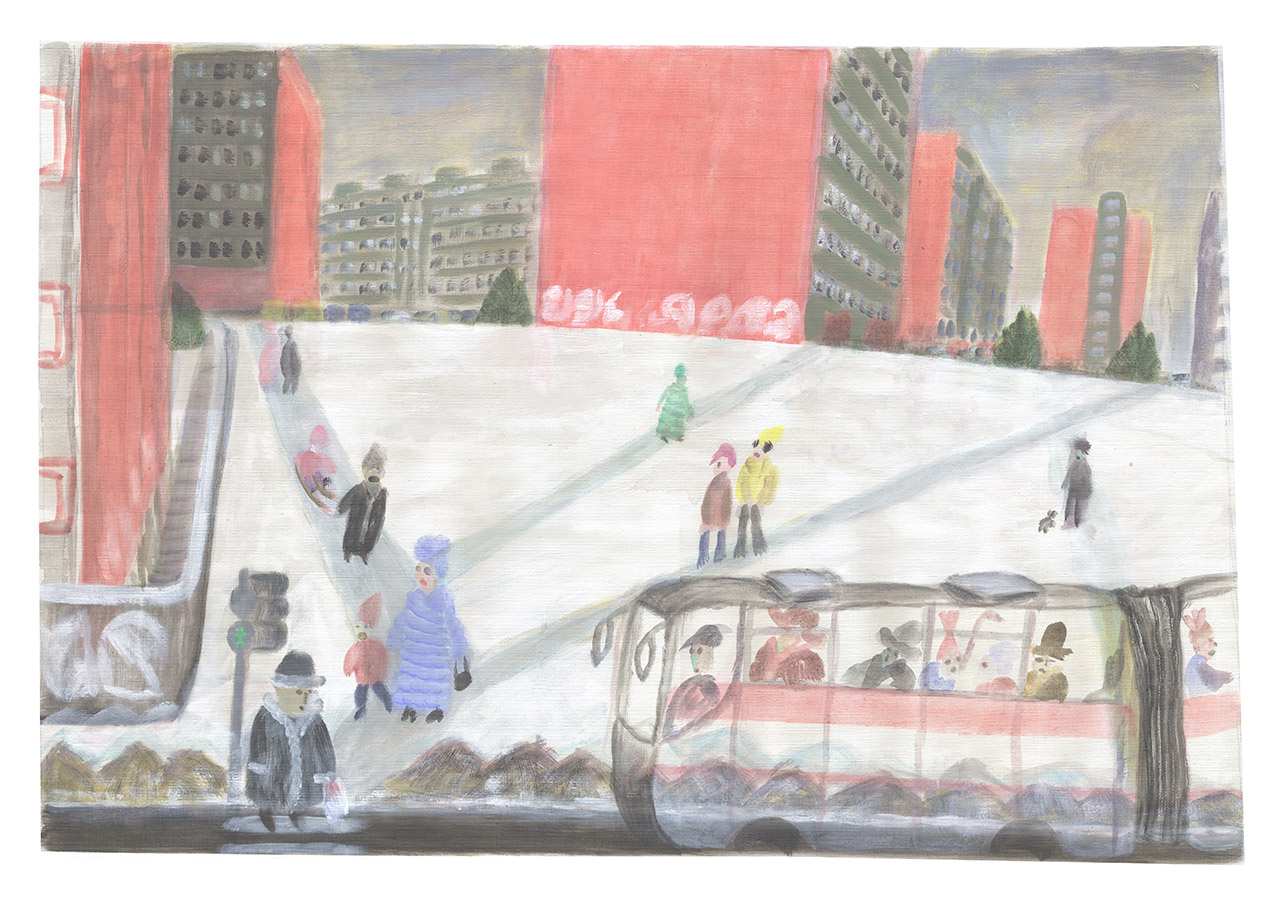 This was a great view – oppressive and domineering. The locals looked like they were in a trance, drifting along the paths effortlessly. The truth was, however, the paths were incredibly slippery, so walking had to be reduced to a careful shuffle.

One of them asked where I was from.

“Ohhh,” they said, and looked at each other understandingly before continued on their way. 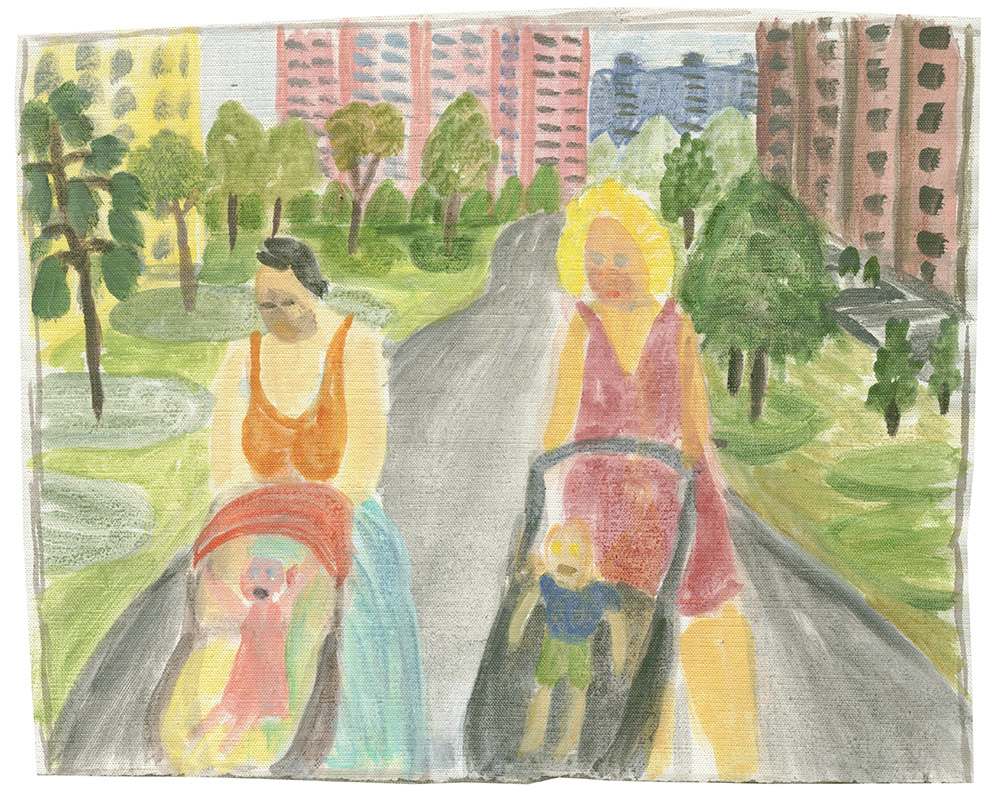 After painting this picture I spoke to one of the young mothers.

“My greatest worry about living in the Panelák is my son falling out of the window. I live on the 8th floor and the window opens very wide!” 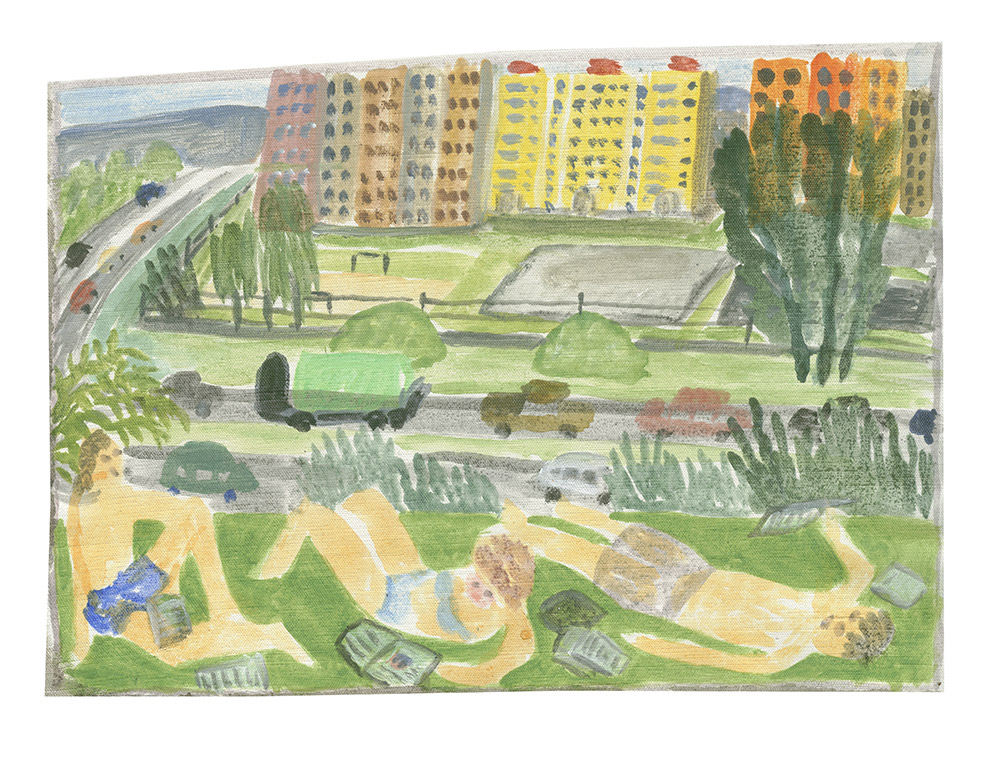 “Bohnice is the best place, because it is outside the city,”one of the students said.

“I think it is too far outside from the city,” another said.

“It’s okay living here,” they decide. “But there is not very much room in the Panelák flats, and the walls are thin, and the lifts are unsafe, but it is cheap for students.” 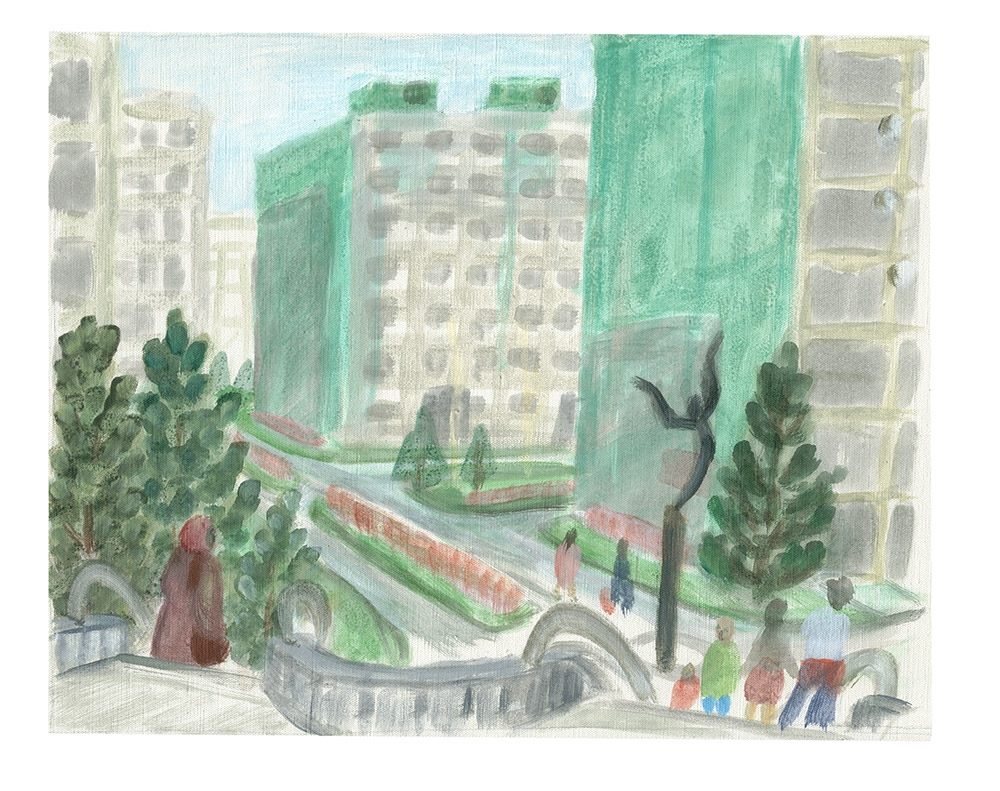 A statue of an Icarus character dating from the communist era – symbolising freedom – now see more as an ironic gesture. 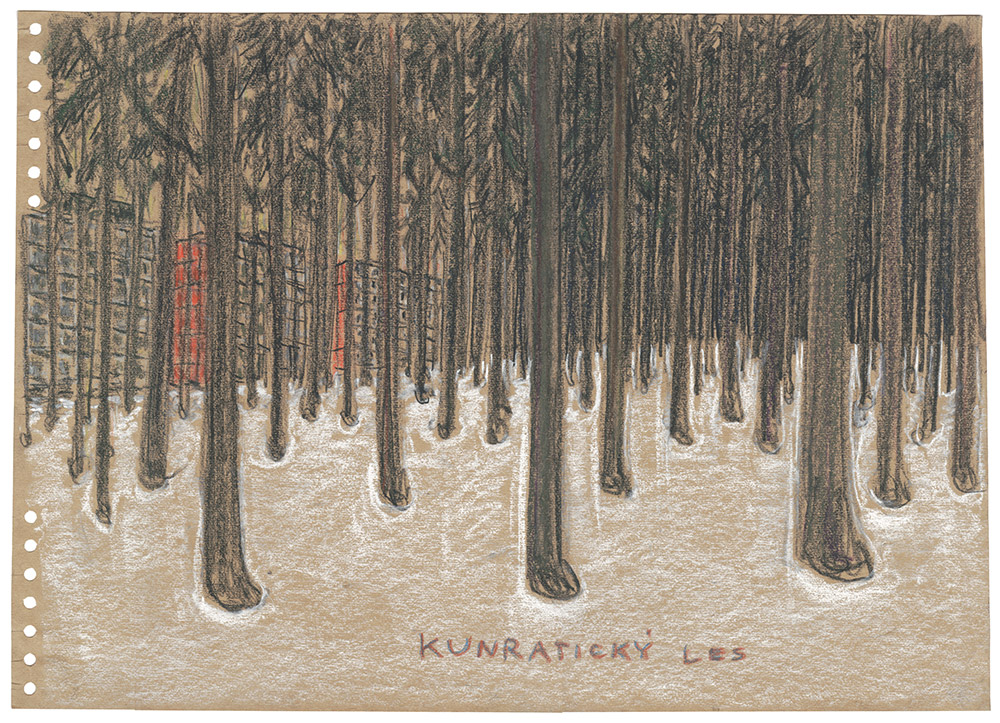 View of Panelák flats from a nearby forest – evening time. 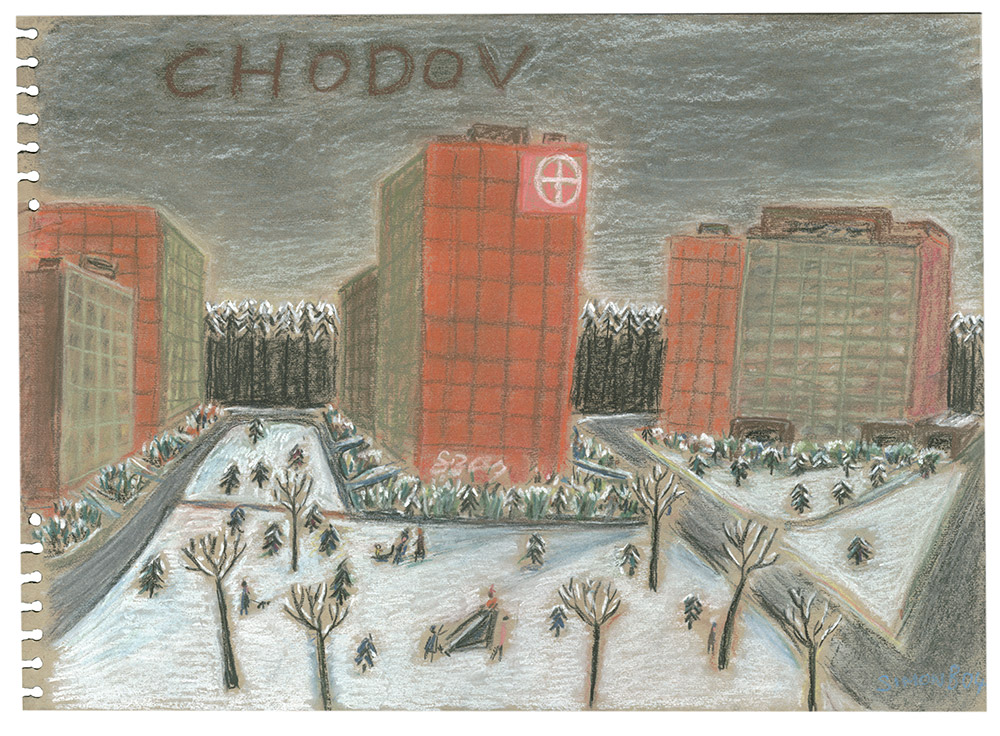 Looking from the window of my friend’s flat.

“Wow what a great view!” I exclaimed.

My friends, however, were not so interested in my enthusiasm, they were just concerned with watching the latest new Mexican soap-opera that had been dubbed into Czech.