Between projects with the Karamojong, I remained committed to doing some paintings. 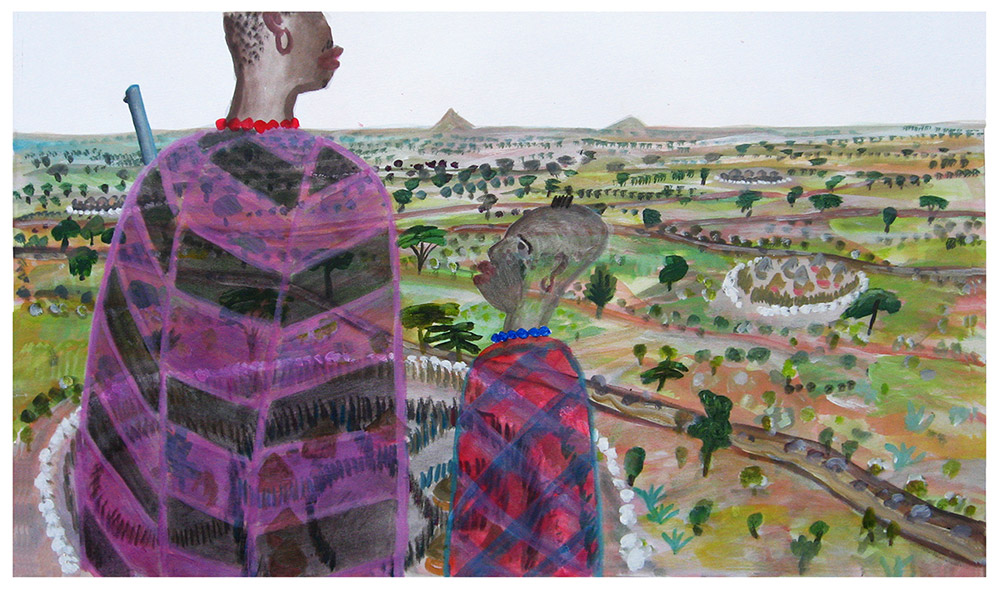 Perusing the land – aware that in the distance there is the constant threat of cattle raiders from neighbouring Karamoja districts. 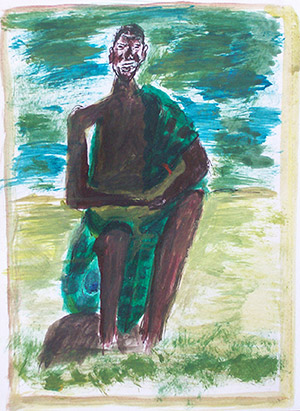 Karamojaland is a dry semi-arid savannah subject to yearly drought and famine. For the last thirty years it has also been the scene of an internal conflict, whereby villages are attacking one-another over the ownership of cows.

The Ugandan Government is in the process of disarming the Karamojong, but small groups of warriors are continuing to go on cattle raids. They are targeting settlements that have already been disarmed – leaving the people who most want peace with nothing.

Due to this insecurity, many Karamojong are fleeing to the capital of Uganda, Kampala. There they survive by using children to beg for money and sweeping the streets for food.

It is said the Karamojong originally came from Ethiopia around a 1000 years ago. They migrated West to Sudan to become the Toposa, South into Kenya and Tanzania to form the Turkana and the Maasai, and across to Uganda where they became ‘tired’ and settled in what is now Karamojaland. 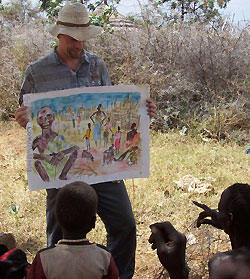 Due to the inter-tribal conflict it was necessary to be accompanied by a local when visiting villages. So, I combined my painting trips with other projects: jewellery and hammock making (Karamoja Design), and also while filming the animated documentary: Karamoja City Warriors.

The nature of Karamojaland being a vast savanna, meant it usually took us two or three hours to walk to our set of villages. We had two water holes on route and often a sorghum beer stop! This involved a local women taking down a large clay jug from her head, and pouring out fermented sorghum beer into litre sized plastic bowls. It often tasted soar, but was incredibly good at getting us back on our feet.

There were two main obstacles with painting in the village: inside the huts it was too dark, and outside it was too hot. The answer was to sketch quickly straight on the canvas whenever conditions allowed. This may be why the pictures sometimes take on a bit of a stressed look. 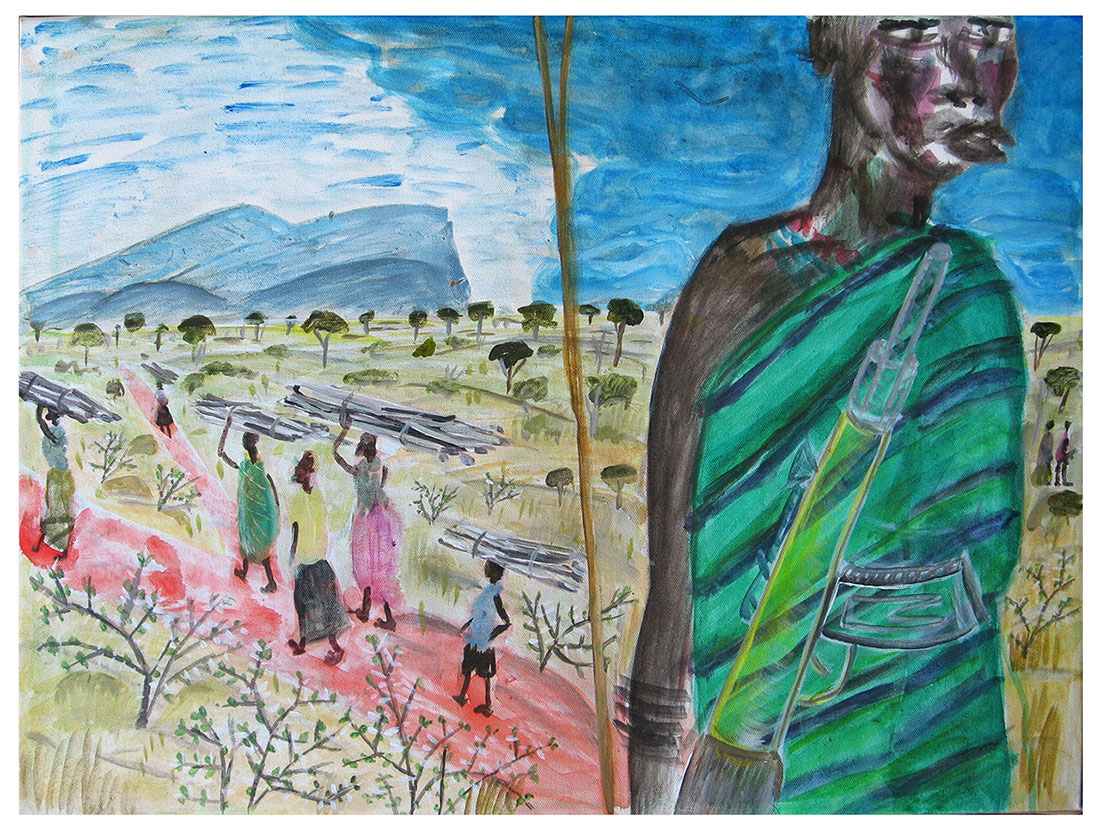 In Karamojaland anyone wearing a blanket might be concealing an AK47 rifle. Women collecting wood from the bush are particularly wary of strangers, and quite rightly so. Warriors frustrated with a failed cattle raid often vent their anger on anyone they meet in the wilds, which is invariably women and girls collecting firewood. 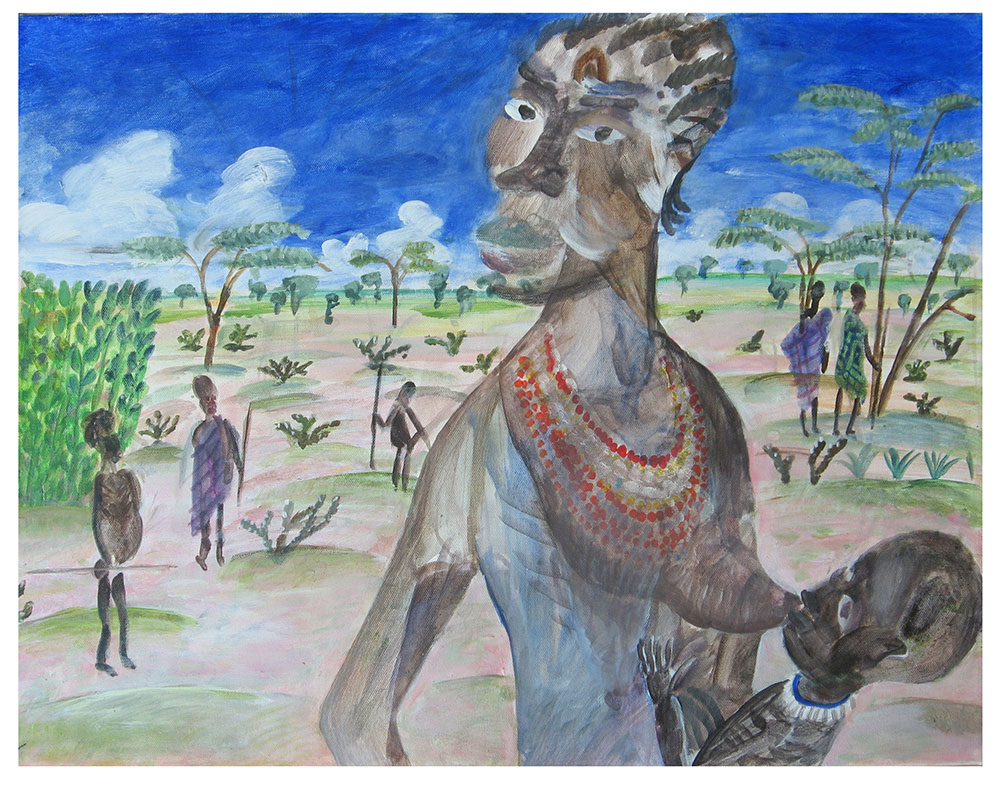 One afternoon, just hours after we left the village, warriors came and took all one hundred goats. We found out the next day. They said they had informed the authorities, but the government soldiers told them that they only chase up raids on cattle. This means, the community will gain no help, and will become significantly poorer, and go hungry. 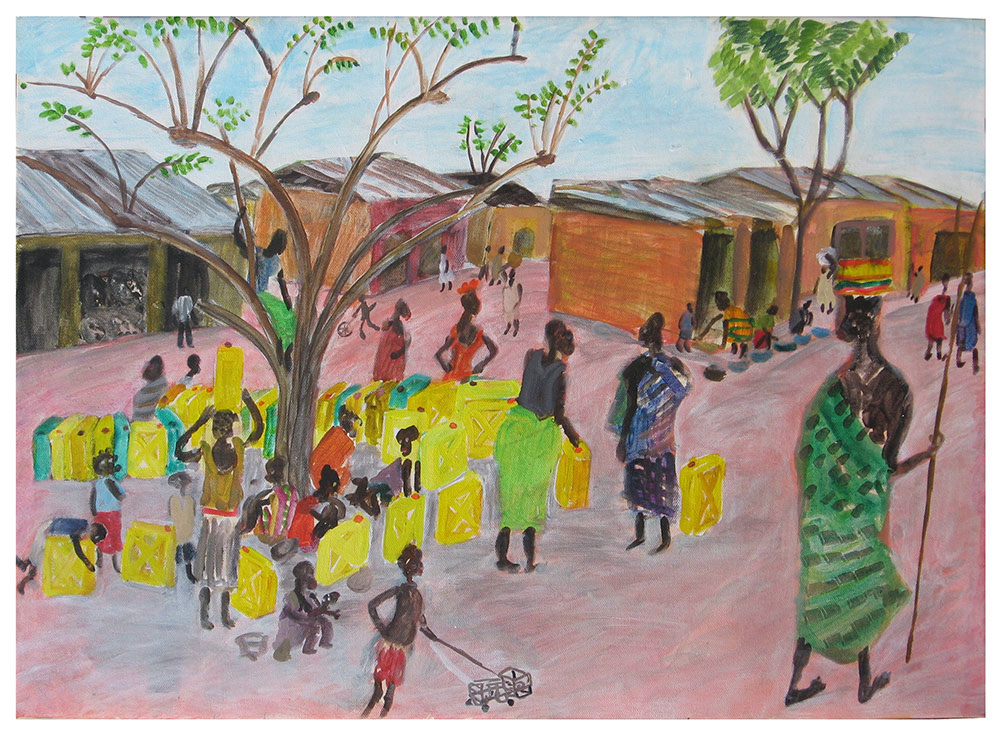 Everyday, a large gathering of women and children sit under the tree in the middle of Matany. They are waiting for a slightly richer member of the community to ask them to collect water for them, and carry it to their home. The women fight over jobs and rush to get the task done, all, however, for very little money. 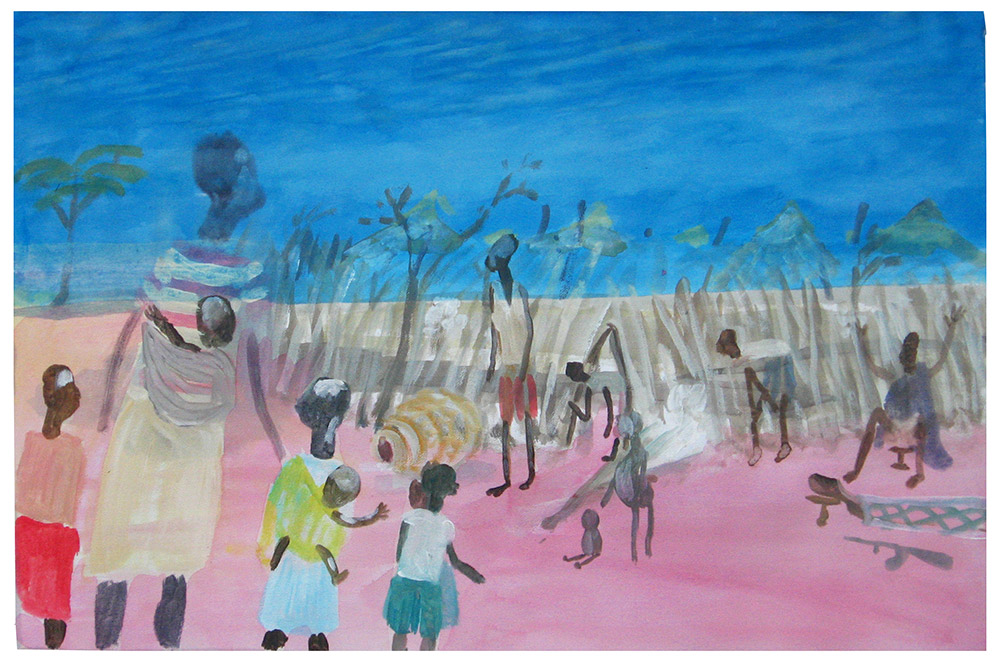 Women are fleeing Karamojaland because of famine and conflict, and they are taking children with them to beg on the streets of Kampala. The communities they leave behind, though, find it difficult to survive without them, because only the old and sick remain.

Karamojaland has spectacular rises of mountains with sudden lush vegetation, but although life seems a lot easier, the threat of attack from warriors is still present. This woman collecting wood told me, as she hurried past, that she had seen warriors higher up on the mountain, so I should pack up my paints sharpish and head back to down to Moroto!

A painting of Kisenyi Ghetto created at one of my workshops for Karamojong street people. 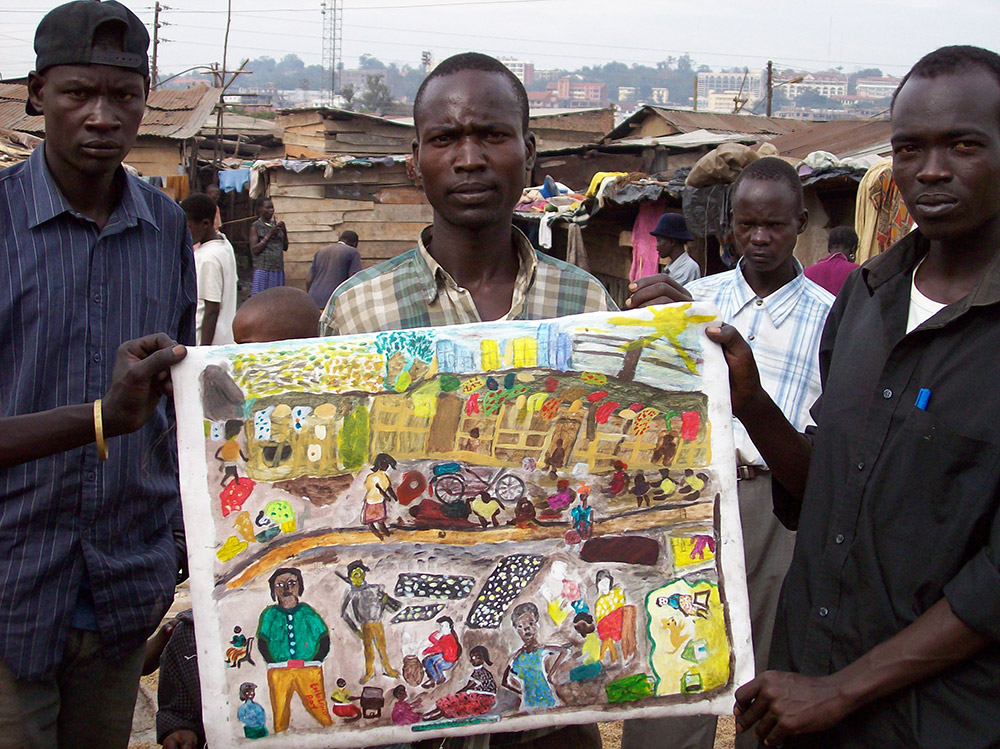 For a more in-depth account of the cattle-raiding problem and why the women are trafficking children to Kampala, read my article: Removing the Karamojong